The saying goes, "a journey of a thousand miles begins with a single step."  Well in this case, our trip is actually closer to 7500 miles and so it ended up being slightly more involved.  The first step in the journey involved just getting my mom to LAX to fly with us to Tel Aviv.  And what seems like a simple task...boarding a direct flight from Nashville to Los Angeles...ended up being far from it.  Braving winter storms, back problems, luggage questions, and about half a dozen other ailments that would sideline any lesser almost-70-year-old jewish grandmother, she somehow survived the first leg of the trip. 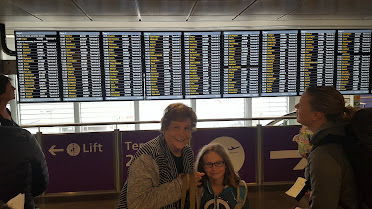 I'm not understating how much of a Hanukkah miracle this happens to be.  At one point my mother proclaimed, "Scott, you're just going to have to accept the fact that you're going on this trip without me."  So mission accomplished! 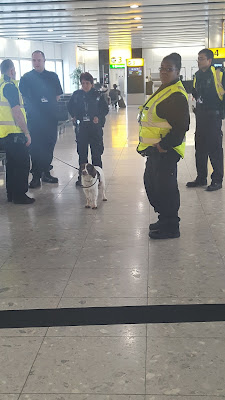 The rest of us officially began our trip with arrival at LAX around 2p on the 20th, and ended with arrival at our hotel in Jerusalem at the equivalent of 2pm the following day. That's a full 24 hours of travel, including 2 planes, lots of movies, a little sleep, a bus ride at Heathrow, multiple trips through security, a van ride from Tel Aviv to Jerusalem and lots of anxiousness (curtsey of my mom).  But, it ended successfully with us settled into our rooms at the Inbal around 12:30am on Thursday morning, Jerusalem time, on the 22nd.

The highlight of the trip, was probably the El Al security dog in Heathrow.  Without question, this was the cutest bomb sniffing dog we've ever seen.  I had to take a picture of it, which then elicited a sharp reaction from the armed El Al security guards, although the dog seemed completely unfazed!