This summer we won't be sending the kids to camp and hitting the beach. Instead, on June 26th, Scott, Melanie, Lucas and Sydney depart for a 2 month adventure in Peru where we'll immerse ourselves in peruvian culture, volunteer to help those less privileged, hike the Inca Trail and live in the jungle. Follow our blog for regular updates, pictures and videos from all 4 of us.

So we've posted lots of pictures to Flickr now.  They are organized in sets, with some pictures & videos of where we're staying, lots of pictures of the city, a tribute to the many dogs of Cusco and even a special spot for Sydney's photos.

Over the last 2 days we've quickly gotten acclimated.  We've explored lots of areas of Cusco, seen the famous 12-sided stone, walked several plazas, and toured a chocolate museum.  Probably the most difficult thing I've had to do is get my cell phone working.  After buying a SIM card for about $5, I unsuccessfully tried to "recarga" (add minutes) the phone about 5 times.  It doesn't help that no one speaks english around here so finally the phone guy actually pulled up google translate and figured out I was trying to put minutes on the wrong phone number.  Now that it's all settled if any of you are interested, you can call me at 952720577 (dial 011 51 before if you're calling from the US).

Anyway, tomorrow's the big day for us as we officially start our program.  At 9a, we're all starting spanish lessons.  I'll be in the basic beginner, while Melanie will be in an intermediate class, and the kids will have private lessons.  We'll be volunteering in the afternoon at a local boys orphanage once the kids get out of school, and we're officially going to be introduced to the boys tomorrow at 4:30p.

More to come...
No comments:

Day 2 started with a traditional peruvian breakfast of bread, butter, jelly, cheese and a little yogurt…not to mention some fresh squeezed papaya juice with some cinnamon (or something like it) sprinkled in, which was particularly amazing.  After breakfast we rested and showered.  The showers in Cusco are an interesting experience…there are no hot water heaters here!  Luckily that doesn't mean we have to take cold showers, instead the shower comes equipped with an electric shower head that heats the water directly.  It works fairly well, but electricity and water don't exactly mix and Melanie got a bit of a shock, not to mention that you have to keep the pressure somewhat moderate or the shower head can't heat the water fast enough!

Anyway, after we were all freshened up, we ventured out for a little exploring curtsey of our personal tour guide…Melanie's brother!  The Plaza de Armas is amazing.  Melanie made friends with a nice 90 year-old Peruvian who came over to touch Sydney's hair (blonds are extremely rare here so she's a bit of a celebrity), and we even got a picture with the original Incan emperor Pachacuti (pictured in gold). 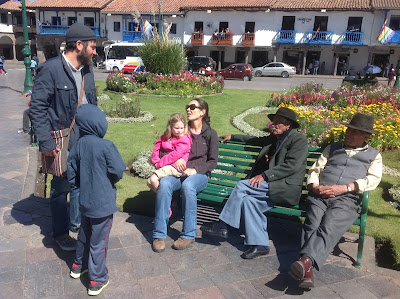 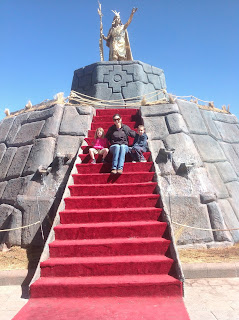 Cusco is especially beautiful at night with all kinds of lights and colors so check out some of our other photos from the last few days that are posted on Flickr.    We'll probably start posting some videos tomorrow or Sunday, including a little home tour of where we're staying so stay tuned.
No comments:

Well, it was a very interesting and rather intense first day.  First the good…the flight from LAX to Lima was fantastic.  Every seat on the plane had access to a personal entertainment system, which meant unlimited movies, TV and games for all of us.  The kids watched Cars2, Iron Man 2, and Phieneas & Ferb, among other things, while also playing Bejeweled and Battleship.  I watched the new Die Hard, Taken 2, and Trouble with the Curve.  The food was good, the wine was good…the 9 hour flight basically flew by (literally).  Now, the not so good…the layover from midnight to 5a in Lima was a little rough.  We weren't allowed through security until 2a and while we tried to catch a few hours of rest on the very cold, hard floor, sleep was fleeting: Once we passed security, it was a bit more comfortable and we pretty much all slept the entire hour flight to Cusco.  Once we arrived and collected our bags, we were met by the Maximo Nivel staff who took us on a brief stop at their office before taking us to where we'll be staying.  We'll be spending the next 6 weeks as guests of Ana and Augustin, who are a very nice couple with a basic 2nd floor apartment on the outskirts of Cusco.  We have 2 rooms…1 with 2 twin beds, and the other with a queen.  It's by no means fancy, with no internet access and only a small 13" television, but it's perfect for our needs and there's an internet cafe directly across the street!  It will take some adjustment, but we'll learn to live without some of the basic creature comforts that we've grown all too accustomed to.

After settling in a bit and resting for a few hours as we all try to get over varying degrees of altitude sickness, we had some lunch.  Ana is a good cook and everyone really enjoyed the traditional peruvian lunch of rice, squash, potatoes, and cheese (it's served like a stew over rice and Lucas couldn't stop talking about how delicious it was!).  Unfortunately, neither Ana nor Augustin are very fluent in english so we're pretty much 100% reliant on Melanie…thankfully her spanish skills have come back pretty quickly.

Following a little more rest, we ventured out back to the Maximo Nivel office where we went through some orientation and safety instructions and learned that we'll be volunteering at a local boys orphanage from 3p-6p in the afternoon so we'll have our mornings completely open to get to know the city.  We were able to meet up with Mel's brother Josh who happens to also be here in Cusco, but we're all a little too wiped to do much more than sit around and we were all in bed for a very early night.  Tomorrow we plan to take it easy in the morning and venture out for lunch and the afternoon.  We'll see how that goes.

Anyway, more updates to come, including videos of the kids and where we're staying.
No comments:


Airport Waiting a video by sasilver21 on Flickr.
In hindsight, perhaps we didn't need to get picked up at 8:30a for a 1:05p flight...especially since the international terminal at LAX has ZERO food options once you pass through security.

Part of the "Peru Prep" involves cutting our hair. We're looking for haircuts that will last us 60 days so Luke and I both went withthe summer buzz cut. Check out the before and after shot below! Before&After, a photo by sasilver21 on Flickr.
No comments:

Thank you sir, may I have another We had the last of the immunizations so we're officially safe from hepatitis, measles, mumps, rubella, meningitis, typhoid, yellow fever, and tetanus, and are loaded up with antimalarials and medications for altitude sickness. Here's a picture of me showing off my guns to the doctor...he was worried the needle might not be able to penetrate so much muscle!

I added a number of new features to the blog so let me know if they're working.  There's now an email subscription feed that should provide you an email alerting you of new posts.  I also added a voicemail widget that allows you to leave us a voicemail that we can access while we're in Peru.  Finally, I have a flickr widget in the right-hand side bar towards the bottom that will randomly go through pictures/videos we've posted to our flickr account.

T minus 17 days and counting

I don't think our house has ever looked this good! The repairs are done, our garage is immaculate, and our closets have been cleaned out (reference photo).  With 17 days till we leave, we've planned our remaining meals to work through our remaining food, and I've generously taken it upon myself to make sure there's no alcohol remaining by the time leave! 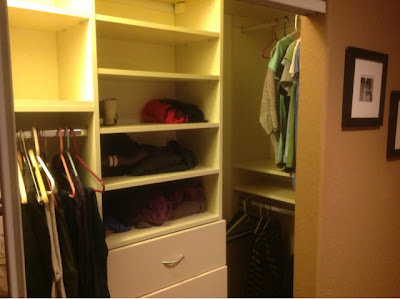