We spent the past weekend traveling to Puno and Lake Titicaca.  It was a long, fascinating and often exhausting 3-day, 2-night trip.  I'll break it up into 3 blog entries, one for each day, because there's so much to tell.

Day 1 started on the "day bus" to Puno.  What's normally a 6 hour bus ride is made into 10 hours by breaking the trip up into a few stops along the way.  The bus is comfortable and modern and we have a bilingual tour guide who pretty much spoke for about 9 of the 10 hour ride, but don't worry the kids stayed entertained by playing video games and watching movies.  After a quick stop in a nearby village that is famous for its bread (it was fantastic), we made our way to Andahuaylillas which is known for only 1 thing…the church in the center square which is often described as the Sistine Chapel of South America.  I've been the Sistine Chapel, and this was no Sistine Chapel…but still impressive in its own right. Next stop was Raqchi, home of a fairly well preserved Incan ruin.  This ruin is a little more modern then the ones we've seen in the Sacred Valley, but still pretty cool. 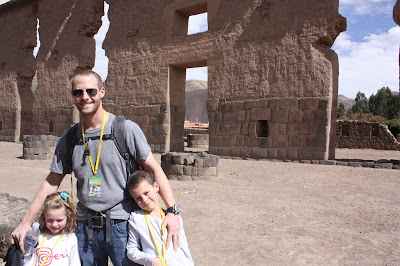 Probably the most interesting were the Qolqas or storehouses constructed to store food for when it's needed. 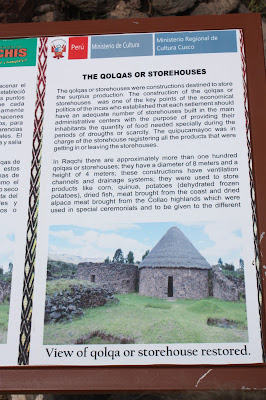 Viewing ruins always works up a good appetite so we stopped for a buffet lunch before heading to La Raya.  La Raya is the highest point on the road to Puno.  At 4,335 meters (over 13k feet) it's easy to be left short of breadth.  Let's just say that the altitude didn't sit too well with one of our group… Altitude is no joke…Melanie felt nauseous, had blurred vision and was tingly in her fingers.  Despite commenting that it's sometimes mental (I may never let Melanie live that one down!), our guide pulled out the oxygen for her which helped tremendously.

About 20 minutes later, Melanie was about 90% and well enough to enjoy our next stop of Pukara where we briefly walked through the town mark, which is like most other markets we've seen…pretty much anything you could every want or imagine, laid out before you on a blanket placed directly on the street.  Before we get to Puno which is more of a tourist/resort town, we drove through Juliaca.  Juliaca is known as a commercial center of Peru and is famous for contraband.  Honestly, the place is a sh*thole!  I would guess that 95% of the entire city is under construction…not a single building looked completed (apparently because if construction is done, taxes kick in).  Even the guidebooks tell you that if you find yourself in Juliaca, leave as quickly as possible…so that's exactly what we did.

Finally by 5p, after a 10 hour journey, we rolled into Puno.  We were met by a representative from our travel agency who took us to our hotel…a journey that should normally take less than 10 minutes, but in this case took 45 because of gridlock traffic and construction.  The good news was that our hotel was very nice and centrally located with 4 beds, wifi and hot water heaters (Melanie would even say the altitude sickness was worth it)!

After a brief pizza dinner that was mediocre at best, our weary bunch was ready to turn in for the evening because we would be making an early start the next day!